MCA started a joke, which started the whole world laughing,
But it didn't see that the joke was on itself... 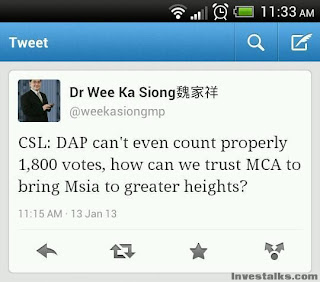 WKS can't even type properly the 3 letters, how can we trust HIM to bring Msia to greater heights?

What is a typo? Answer from Wikipedia

A typographical error (often shortened to typo) is a mistake made in the typing process (such as spelling) of printed material. Historically, this referred to mistakes in manual type-setting (typography). The term includes errors due to mechanical failure or slips of the hand or finger, but excludes errors of ignorance, such as spelling errors.

A funnier joke of course comes from the No.1 of the party, CSL.

CSL named a few bad deeds Anwar did when he was with UMNO and said Anwar, previously being Minister from UMNO for 17 years, still carry UMNO DNA in his blood.

Is CSL implying UMNO is evil? Then why is MCA still associating with UMNO??
Posted by Malaysia Stock Talk at 13:52

Email ThisBlogThis!Share to TwitterShare to FacebookShare to Pinterest
Labels: Jokes, MCA, Others