I don't know the reason for the inconsistency but I really don't like this.

In the Country Heights Grower Scheme prospectus dated 8 June 2012, they include the financial statement of the management company, which showed the company has been profitable since 2007 (see page 38 of the prospectus) 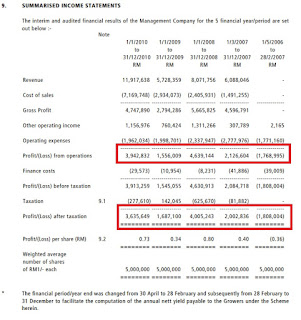 However, when it comes to the proposed voluntary termination of the scheme, Gua Musang plantation account, which is less impressive was used instead.

Why the inconsistency? One is to attract investors and the other is for the termination the scheme. But for the same scheme, why different accounts were used? Good if Tan Sri can explain this to the growers.

Besides, there is flaw in the scheme. The production cost now is probably about RM1300-RM1500/ tonne. According to the payment schedule, Country Heights Grower Scheme will pay investors at least 4% annual return if the CPO price is RM1301-1500/tonne. If CPO comes to this price, it merely breakeven. How is the company going to pay investors? Investors may not be savvy enough to see this, but did the boss of the scheme fail to consider the inflation factor when introducing the scheme? Either way, it reflects badly on the boss and the company.

I am just wondering if the CPO price stays high at over RM4000/tonne, will the company convene an EGM to pass a resolution to share the extra profit with minority growers?
Posted by Malaysia Stock Talk at 22:59