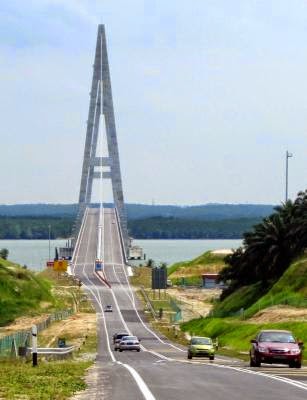 This is part of Senai-Desaru between Cahaya Baru and Penawar. As can be seen from the photo above, it is a "single carriageway two-lane expressway", without divider in between.

Expressway is defined as:

- A wide road for fast-moving traffic, especially one in the US that goes through a city, with a limited number of places at which drivers can enter and leave it. (Cambridge)

- A highway designed for fast traffic, with controlled entrance and exit, a dividing strip between the traffic in opposite directions, and typically two or more lanes in each direction. (Oxford)

- A highway with several lanes (=lines of traffic) going each direction, built so traffic can travel at high speed for long distances. (Macmillan)

Are expressway users who pay toll being short-changed?

Posted by Malaysia Stock Talk at 15:32