SCOMNET - At an Inflection Point? 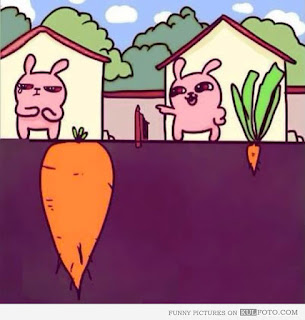 The carrot on the left can probably paint a thousand words about the recently announced proposed acquisition of the remaining 80% stake in Supercomal Medical Products Sdn Bhd (SMP).

SCOMNET (Supercomnet Technologies Bhd) was the first company to be listed on MESDAQ (now known as Ace Market) on 30 April 1999, carrying Bursa stock code "0001". It commenced its business in April 1991 and started with manufacturing of PVC compound, cables and wires for electronic devices and cable assemblies and data control switches. After it was listed, it diversified into manufacturing of advanced high technology cables for the automotive and medical instrument sectors. In 2015, its 20% associate company, SMP, introduced a new product, enhanced disposable pressure transducer (DPT) which has been driving the growth of the associate company.

AT AN INFLECTION POINT?
For the past 5 years, the share price had been fluctuating between 10sen and 20sen, corresponding to the rangebound financial performance of the company.

The share price made a breakout earlier this week after the announcement of the proposed acquisition.

WHY THE ACQUISITION COULD BE A GAME CHANGER?
1. Niche products
The target company sells medical cables and DPT. Being products of mission-critical nature where failure can literally means the difference between life and death, manufactruing of the medical products demand the highest quality. Therefore, the risk and cost of switching are high. Besides, the medical cable industry has relatively high barriers to entry with long production cycle as most of the products will require a gestation period of more than 15 months from product development, customer qualification to production on-stream. SMP's medical cable is approved by the Food and Drug Administration, US, as well as qualified by internationally renowned manufacturers and established players in the industry. (reference: company announcement)

2. Business has been growing
The target company was set up in 2004. It started commercial operation in 2005 and turned profitable in 2008. Business took off in 2009. Both the top and bottom lines surged in 2015 after the launch of a new product, DPT. The growths experinced by SMP in 2015, 2016 and 1H17 were mainly driven by the enhanced version of DPT. 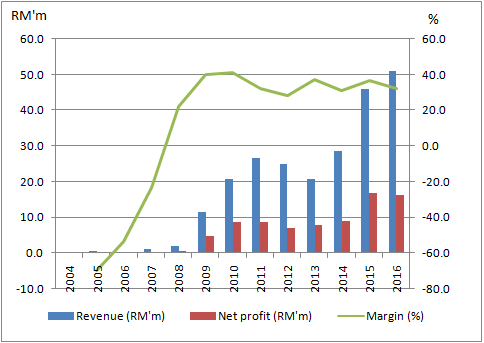 3. High Margin
Since the operation has gained economies of scale in 2009, SMP has been recording extraordinary net margin of between 28% and 41%. This suggests that the products are niche and the company, as a supplier, seems to have strong bargaining power. This typically allow the company to pass on cost escalation to customers without much difficulty.

4. Zero Borrowings
Zero borrowings before and after the proposed acquisition.

5. Postive outlook
The existing business remains challenging with little prospect for growth but the outlook for the target company looks positive.

6. High ROE
SMP offers very high ROE. 37.9% for 2015 and 30.7% for 2016. ROE is one of the important factors Warren Buffett looks at when investing in a business. SMP is making a RM26m dividend payment prior to completion of the acquisition. This will increase the ROE as the denominator has been reduced substantially. The shareholders' fund as of end-2016 was at RM56m. 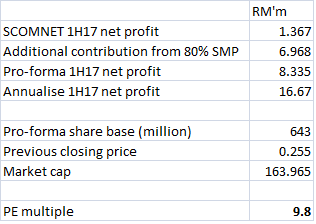 Medical related counters such as IHH, TOPGLOV, HARTA, KOSSAN, KAREX are trading at high price/earnings multiple ratios. They are in a different league, being giants in their respective fields.

Maybe quick comparisons can be made with COMFORT and LKL. COMFORT is trading at 14.0x based on annualised earnings while LKL is trading at 22x FY17 earnings. CAREPLS is not included as the price/earnings ratio appears to be an outlier.

The proposed acquisition of SMP is expected to complete by year end.

Visit my facebook page
Posted by Malaysia Stock Talk at 00:26

Email ThisBlogThis!Share to TwitterShare to FacebookShare to Pinterest
Labels: SCOMNET