There was a sense of Deja Vu when CANONE launched an offer to acquire KIANJOO. But in this round, which is about 10 years later, the little fish has almost swallowed the big fish. At the time of writing, it has gained control over more than 80% of KIANJOO shares.

The news caught market’s attention as it was a case of a small fish eating a bigger fish. When the announcement was made, KIANJOO, at RM1.30/share had a market cap of RM577.4m. Even the acquisition amount of RM241.1m to acquire 32.9% stake KIANJOO was already much greater than CANONE’s market cap of RM130.3m at that point of time.

What actually impressed me more is the ability of CANONE swallowing the bigger fish WITHOUT RAISING A SINGLE CENT from the shareholders, NOR ISSUANCE OF ANY NEW SHARES.

Based on the circular, the performa effect of the 32.9% acquisition would raise CANONE’s net gearing from 1.23x to 2.85x. Dragged by legal actions by the See family, the acquisition was only completed on 25 January 2012. Fast forward, CANONE’s net gearing was brought down significantly to a mere 0.52x as at end-2018. This is despite the fact that CANONE has been paying annual dividend of 3sen/share to 5sen/share since 2009.

How did CANONE achieve it, without raising a single cent from the shareholders' not issuance of any new shares?

CANONE subscribed for 80% stake in F&B Nutrition Sdn Bhd, which manufactures dairy and non-dairy products, for RM8m in Nov 2006 for RM8m. Since then, the top line and bottom line of the F&B sunsidiary have been growing by leaps and bounds, as shown below. 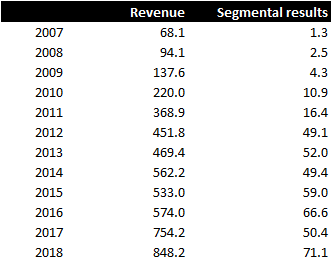 However, the exceptional earnings growth of the F&B division has been masked by less inspiring performance of its can division and contribution from its associate. 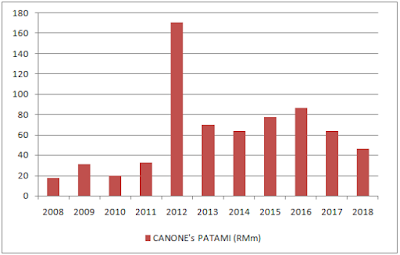 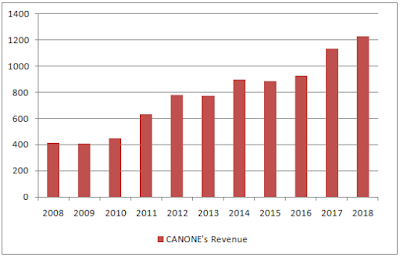 At CANONE's current market cap of RM571m, you get i) a fast growing F&B business; ii) CANONE's can business; as well as iii) more than 80% of KIANJOO, which is the largest packaging company in ASEAN.

Going forward, CANONE's bottom line is expected to be burdened by heavy financing costs, arising from the takeover of KIANJOO. However, as long as the cashflow from KIANJOO is sufficient to service the financing for the acquisition of KIANJOO's shares, I think CANONE is undervalued.

There is value to be extracted from the F&B business of CANONE. One way is to list its F&B business, or to dispose it at a decent premium. Back in April 2016, KWAP was in final stages of completing an acquisition of a 30% stake in CANONE's F&B business, for RM280m (source). This valued the F&B business at RM933m back then. At that time, CANONE embarked on a sale of its F&B division, seeking a valuation of up to 20x earnings.

Posted by Malaysia Stock Talk at 18:48