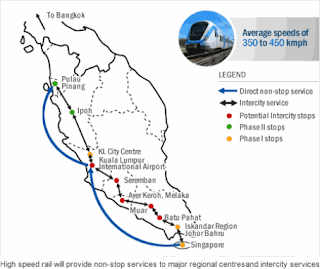 60 per cent of the cost will go towards infrastructure development, including civil works and track laying, and about 30 per cent on rolling stocks.

The rail network is expected to cut travel time between Kuala Lumpur and Singapore from six hours to 90 minutes. This will require trains travelling at 250kph.

The project is important for Malaysia as the same alignment can carry freight during off-peak hours Germany’s Siemens proposed the use of its Velaro trains, which have a top speed of 350kph.

UEM Group-Hartasuma, China Infraglobe Consortium-Global Rail and YTL Corp have made presentations on the project to the National Key Economic Area laboratory.

Next, news reports quote sources to say that the rail link could cost as much as RM30bil, which has ballooned considerably from YTL Corp's original proposal of around RM8bil before land acquisition costs.
It looks like that RM30bil does not include land costs but it's not clear at this ill-defined stage.

But for our economic analysis, let's assume the cost is RM30bil which is funded 10% by equity (RM3bil) and the rest of RM27bil by loans. At an interest rate of just 6%, yearly loan interest alone before repayment comes up to RM1.62bil! Earnings before interest will have to be that much before it makes profits.

Let's say its shareholders are not greedy and want a return of 15% pre-tax on their equity which means a pre-tax profit of RM450mil. That means, its pre-tax earnings before interest is around RM2bil, a nice round figure to work with.

Can it make that much? Let's see. We assume the pre-tax profit margin on sales is say one third or about 33%, which is quite large. Then its sales need to reach RM6bil a year! That's more than Air Asia's entire revenue last year of RM4.5bil.

The key question is this: Is the travel market between Malaysia and Singapore large enough to sustain a RM30bil link? The clear, unambiguous answer is: No! Simply impossible.

What is the travel market between the two countries? One easy way is to calculate the amount of air, road and rail travel into and out of Singapore. That's not likely to garner even RM2bil in total and remember that alternative travel sources are not going to disappear with the KL-Singapore express link, especially since it's likely to be priced at more than airline tickets to recover the massive costs involved.