Asia Media - What the shareholders should know


Our DTTB will be rolled out initially in Klang Valley upon the completion of the construction of transmitter, transmission towers and gap fillers, which is expected to be in the first half of 2011

RM16mn, which was part of the RM22.54 IPO gross proceeds was previously allocated for capex, to invest in DTTB. The launch of DTTB has been delayed for more than 2 years. What caused the prolonged delay? Why another RM20m is required, as compared to the initial RM16mn to launch the DTTB in Klang Valley? This was not explained in the circular to shareholders dated 4 July 2013.

2. The group intends to expand the DTTB coverage to JB in 2013 (page 15 of circular dated 4 July 2013). The commencement of DTTB in Klang Valley has been delayed for more than 2 years. Why not the group focuses on the implementation of DTTB in Klang Valley, get it run smoothly first before expanding it in JB?

3. (Page 58 of circular dated 4 July 2013) DOOH Transit Media Industry (Malaysia) grew 23.7% from 2011 to 2012, and forecast to grow by 23.8 in 2013. CAGR of 28.7% is expected between 2013 and 2017. This gave promising prospects for DOOH Transit Media Industry. However, did they non-interested directors and the independent adviser highlight the flattish revenue experienced by AMEDIA in recent quarters and provide the causes of it? 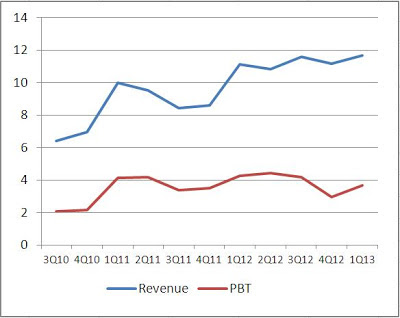 Does Asia Media has liquidity issue?

For the above, is omission the same as lying?
Posted by Malaysia Stock Talk at 13:30

Email ThisBlogThis!Share to TwitterShare to FacebookShare to Pinterest
Labels: AMEDIA