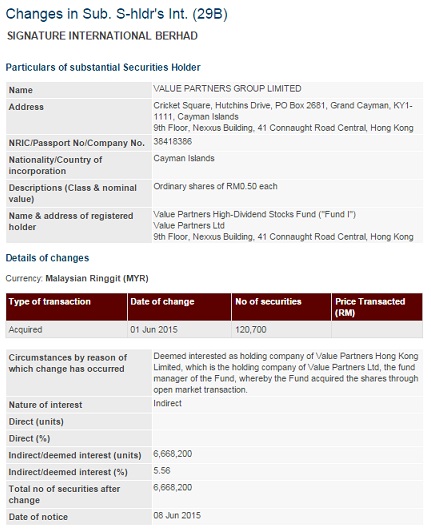 1. Value partners Group which has assets under management (AUM) of US$17b emerged as a substantial shareholder in Signature International Berhad, a smallcap in Bursa Malaysia with market cap of RM333.6m

2. Melting signs versus value. Both Cheah Cheng Hye and Tan Teng Boo are proponents of value investing. However, both of them have contradicting views on Signature.

Cheah Cheng Hye was awarded the Best of the Best Region Awards -CIO of the Year in Asia in 2011, was named 25 most influential people in Asian Hedge Funds in 2010, and 25 most influential people in asset management in Asia in 2009. Cheah Cheng Hye has been given the nicknames by the Chinese media including Golden Finger and Warren Buffett of the East.

Cheah Cheng Hye outperforms Tan Teng Boo in term of AUM and awards received. However, I think Tan Teng Boo is a better salesman, and stronger in marketing, but a bit arrogant and manipulative at times.

It will be interesting to see who makes the right call on Signature. However, Tan Teng Boo probably has lost the first round. He alerted the audience on the melting signs in Signature during his seminar on 9 May 2015. Despite the FBMKLCI has dropped 4.0% since the seminar, Signature has gained 18.3% since then, an out-performance of 22.3 in a month's time! A disastrous call on Signature by Tan Teng Boo

Posted by Malaysia Stock Talk at 20:58