CIMB is the only broker covering Tomypak currently. While I am positive on the outlook of the company, CIMB was quite skeptical on the margin improvement and its expansion plan. It is alright to have differing opinions as long as the reasoning is sensible.

The 2 latest reports by CIMB (for registered users only) can be found here:
Running to far ahead dated 26 Nov 15
Over-ambitious 10-year capex strategy dated 13 Dec 15

Despite the good set of results and earnings upgrade by the CIMB, the same broker surprisingly cut the target price from RM1.96 to RM1.84! It didn't seem to jibe. Perplexing... 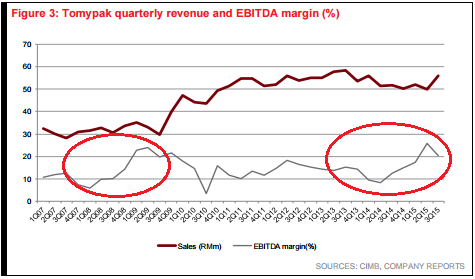 From the same report, similar margin improvement could be observed in 2008 and EBITDA margin of slightly above 20% was also seen in early 2009. So this was not a margin that had not been seen before. Furthermore, the margin improvement came from a low base.

The broker was unsure how the company's profit margin recovered so quickly since the entry of a new major shareholder in 4Q14.

Mr. Lim has been increasing his stake in Tomypak since he took over the executive role in Tomypak and this could be a sign of his confidence in the prospects of the company.

If the earnings were not real, how the group paid for RM12m land purchase, part of the capex for factory expansion and increased dividend payout?

3. Were the "facts" in the reports right?
Its report dated 26 Nov 15 stated the company geared up to finance the set-up of a new factory, which would double existing plant capacity.

In The Edge Weekly dated 20 July 2015, Tomypak is planning to build a new plant with an annual production capacity of 35,000 tonnes on 10.5 acres of industrial land in Senai, Johor. Its existng plant in Tampoi, Johor Bahru, which has a production capacity of 17,500 tonnes, is running at a utilisation rate of 80%. It should be tripling of capacity instead of doubling the capacity.

Separately in CIMB report dated 13 December 2015, it wrote in Phase 1, Tomypak hopes to double its production capacity by end-2016. The Edge Weekly dated 14 December 2015 (available 12 December 2015) highlighted Tomypak has a planned capex of RM120m to RM140m for its three-phase new factory project. Each phase will provide 12,000 tonnes of additional capacity per annum. It will be two-thirds increase in existing capacity instead of doubling capacity.

On expansion, CIMB in the report dated 26 Nov 15 commented the building of a new factory is a long overdue exercise as the existing factory has insufficient space, and added that Tomypak should have done this expansion a few years ago.

But when Tomypak revealed its plan to triple its capacity in 10 years (at CAGR of 11.6%), the broker raised its doubt whether the expansion plan was overly ambitious.

While it is true that overseas MNC customers are very sticky and it could take a minimum of 2-3 years for them to switch suppliers, Tomypak could possibly secure additional orders from its existing MNC customers. Central procurement is common in MNCs. Tomypak which has significant revenue generated from overseas markets, may gain market share through its existing MNC clients. The additional orders from overseas markets could be very sizeable.

5. Imposed steep discount to a superior player?
Compared with Daibochi, Tomypak is superior in term of margin, ROE, ROA, lower gearing, better trading liquidity and growth potential. Not only a steep discount imposed on Tomypak's target PE multiple puzzling, CIMB widened the discount from 30% to 40% in its report dated 26 Nov 2015 when earnings beat expectation, margin continued to improve, and dividend payout increased was even more baffling!
Posted by Malaysia Stock Talk at 21:16