Warren Buffett puts a lot of emphasis on ROE.

SUNCON, ECONBHD and INTA are examples of pure construction/ engineering companies that generate high ROE and have been doing well.

KAB, an electrical and mechanical engineering company recently listed in Bursa Malaysia, is another engineering firm which offers high ROE.

A comparison is made between INTA and KAB. Both are pure engineering companies, listed on ACE market in 2017, and in net cash position after listing. 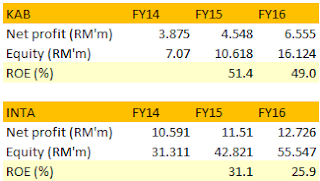 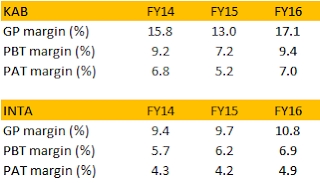 Inta Bina's outstanding order book was at RM634.7m as of end-September 2017. That is about 2.2x of its FY17 annualised revenue.

The earnings for both companies which were listed this year are affected by listing expenses. To have a more mearningful comparison of the valuations for these 2 companies, earnings were adjusted for listing expenses and PBT were used instead of PAT.

Based on INTA and KAB share prices of RM0.37 and RM0.275, KAB has lower market cap/ adjusted annualised PBT.

5. Competitive strengths and positive industry outlook
i) KAB is a nominated subcontractor in most of projects undertaken (an average of 70% for the past 3 years). Direct negotiation with project owners on the terms of subcontracts is less competitive as compared to a public tender and, thus, a better margin.

iii) The company hopes to increase revenue generated from maintenance services, which is recurring, to 20% to 30% of its total revenue in 2 years' time

6. Top line and profit on an upward trajectory 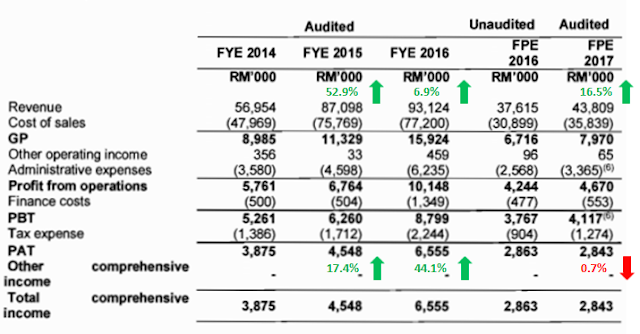 Both top lines and PAT are on an upward trajectory. Excluding RM0.5 one-off listing expenses incurred in financial period ended 31 May 2017, PAT for FPE 2017 would have been higher than FPE 2016.

"We are confident that 2018 will be a better year for our group in view of our expansion plans, as well as the improving macroeconomic landscape," KAB managing director Datuk Lai Keng Onn said in a separate statement. (source)

7. Peers. Majority of listed companies with M&E as core business such as LFECORP, PASUKGB, YFG and MTRONIC are struggling to deliver good profit numbers.


8. Conclusion
Small base (market cap <RM100m), low capex, high ROE. A stock that I would want to include on my radar screen.

This posting is not implying KAB is superior to INTA nor KAB is cheaper in terms of valuation, but merely as a comparison made to have a better understanding of a stock against its peers.

Lysaght - Too Good to be True? More so Now! http://bursastocktalk.blogspot.my/2017/11/lysaght-too-good-to-be-true-more-so-now.html

Posted by Malaysia Stock Talk at 00:22

Email ThisBlogThis!Share to TwitterShare to FacebookShare to Pinterest
Labels: KAB