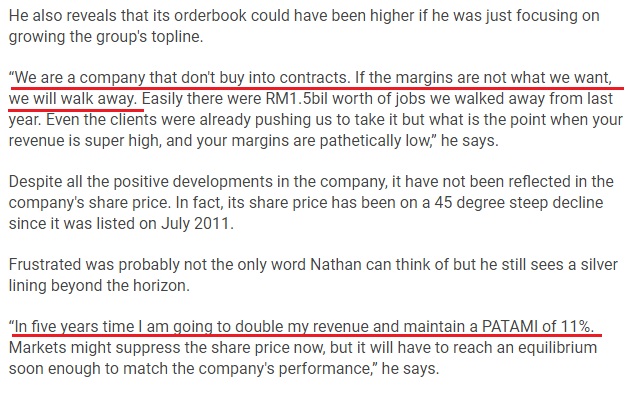 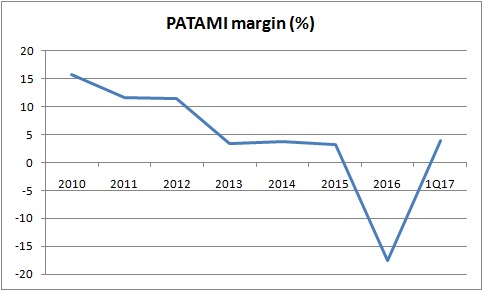 PATAMI margin of 11% seems to be a thing in the past after he made that statement in April 2013. PATAMI margin has been below 4% since 2013.

4. Serious Delay in the Completion of Liftboats

In May 2014, Eversendai secured a contract to construct two liftboats. The liftboats were supposed to be ready by February and May 2016. However, to date, none of them has been completed. It probably takes about double the original contract period to complete the works. Whether the delay is caused by the client (related party transaction, a vehicle controlled by Tan Sri AK Nanthan) or Eversendai? And whether Eversendai would be compensated if the delay is caused by its client? Substantial overrun in overhead costs is likely given the prolonged delay.

Another blemish in the company was the bad investment in Technics Oil & Gas in which the company incurred more than RM100m of losses.

Conclusion
I would avoid the stock as it is not a stock that I could buy and sleep soundly at night given its track records and erratic earnings. There are more than 800 counters in Bursa Malaysia and I am sure there are some stocks that offer more attractive risk reward ratios. Furthermore, the stock is not cheap at current valuation, having high net gearing of 1 time (before private placement), and considering the payment risk associated with the liftboat project. Besides, decent dividend is unlikely in the foreseeable future due to its high gearing ratio.

While I have reservation on the stock, credit must be given to Tan Sri AK Nathan for his incredible track records in successfully completing various world class iconic projects.
Posted by Malaysia Stock Talk at 22:35